in association with the YORK FESTIVAL OF IDEAS 2012

Tim is a normal thirty-year-old. He has a normal job, a normal flat, a very normal girlfriend...but one day he finds out that he is a direct blood descendent of the most epic monster hunter Van Helsing. Destiny says it is time for a Helsing to rise up and whup the asses of the creeps, freaks, and monsters that have hidden in the murkiest of murky bits for too long. Screening of I Am Tim feature, followed by Q&A with the filmmakers from RedShirt Films.

RedShirt Films is a teeny tiny film company based in York, England, Earth, established in 2010 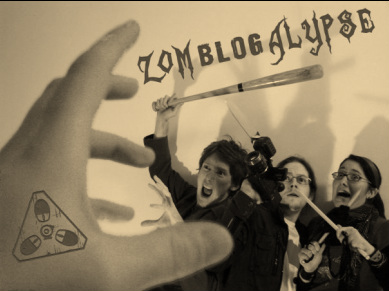 Three survivors. One flat. Lots of zombies. See the blogged adventures of Miles, Tony and Hannah as they fight, run and knit their way through York’s zombie apocalypse. There will be a screening of Zomblogalypse feature , followed by Q&A with the filmmakers from MilesTone Films.

MilesTone Films is run by Miles Watts and Tony Hipwell, who are both graduates of York St John University. They have been working on their cult web series Zomblogalypse with fellow YSJ alumni Hannah Bungard since 2008.

FILMS COST £5 (£3 concessions).
OVER 18s ONLY
PREBOOKING IS ESSENTIAL. PAYMENT CAN BE MADE BY CHEQUE OR VIA OUR PAYPAL ACCOUNT. TO PREBOOK, EMAIL wowlecturesyork@gmail.com